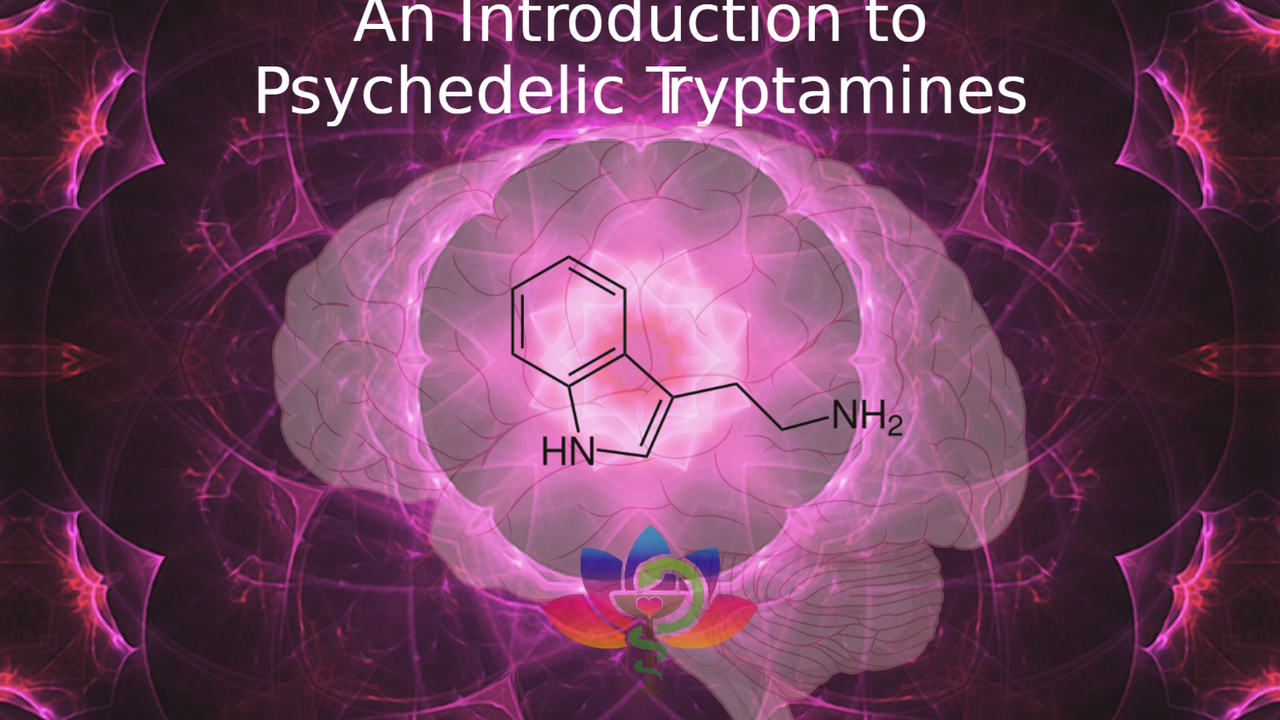 Tryptamine is a naturally occurring neurotransmitter in the brain that is derived from tryptophan and can be converted into other neurotransmitters such as serotonin and melatonin. Tryptamine acts as a chemical backbone for both non-psychoactive prescription (e.g., triptans) and psychedelic drugs. Ergolines such as LSD contain a tryptamine structure within its larger ring complex and are oftentimes discussed as belonging to the tryptamine class of serotonergic psychedelics. Tryptamine psychedelics have ranged from being termed psychotomimetic, hallucinogen, psychedelic, entheogen, and even psychoplastogen compounds based on the range of effects possible between subject and observer positions as well as biological and phenomenological effects [1]. While harm reduction frameworks such as ‘set and setting’ could apply broadly to use of drugs and medicines, it is perhaps most imperative to have supportive and safe environments as harm reduction measures for tryptamine psychedelics due to the intensity and profundity of non-ordinary states they may elicit.

Tryptamines can be classified into three categories: neurotransmitter, non-psychoactive and psychedelics.

Classic tryptamine psychedelics including psilocybin, LSD, and DMT bind to a variety of post-synaptic serotonin receptors. Depending on the agent they can also bind some adrenergic, dopaminergic, and sigma receptors. These compounds bind 5HT2A receptors which cause an increase in serotonin signaling and are critical in mediating psychedelic effects. Notably, these agents do not increase intrasynaptic serotonin. They have little effect on the release of serotonin from the presynaptic vesicles through modulating transporters such as VMAT2 or SERT [2].

Both psychedelic and non-psychedelic tryptamines can bind the 5HT2A receptor, which raises the question of how one produces a potent hallucinogenic experience while the other leaves people feeling normal. It is thought that bias agonism or functional selectivity can be used to explain this phenomenon [2]. This theory hypothesizes that a compound like LSD is able to bind to the 5HT2A receptor and strongly activate a pathway that specifically signals psychedelic effects. On the other hand, lisuride can also bind the 5HT2A receptor, although may only activate the serotonergic pathway completely avoiding any activation of the psychedelic pathway. The types of signaling mechanisms stimulated, relative strengths, and types of receptors that are simultaneously stimulated (e.g. 5HT1A, 5HT2C, D2, etc.,) likely give rise to differences in subjective experience and possibly different therapeutic applications [3]. 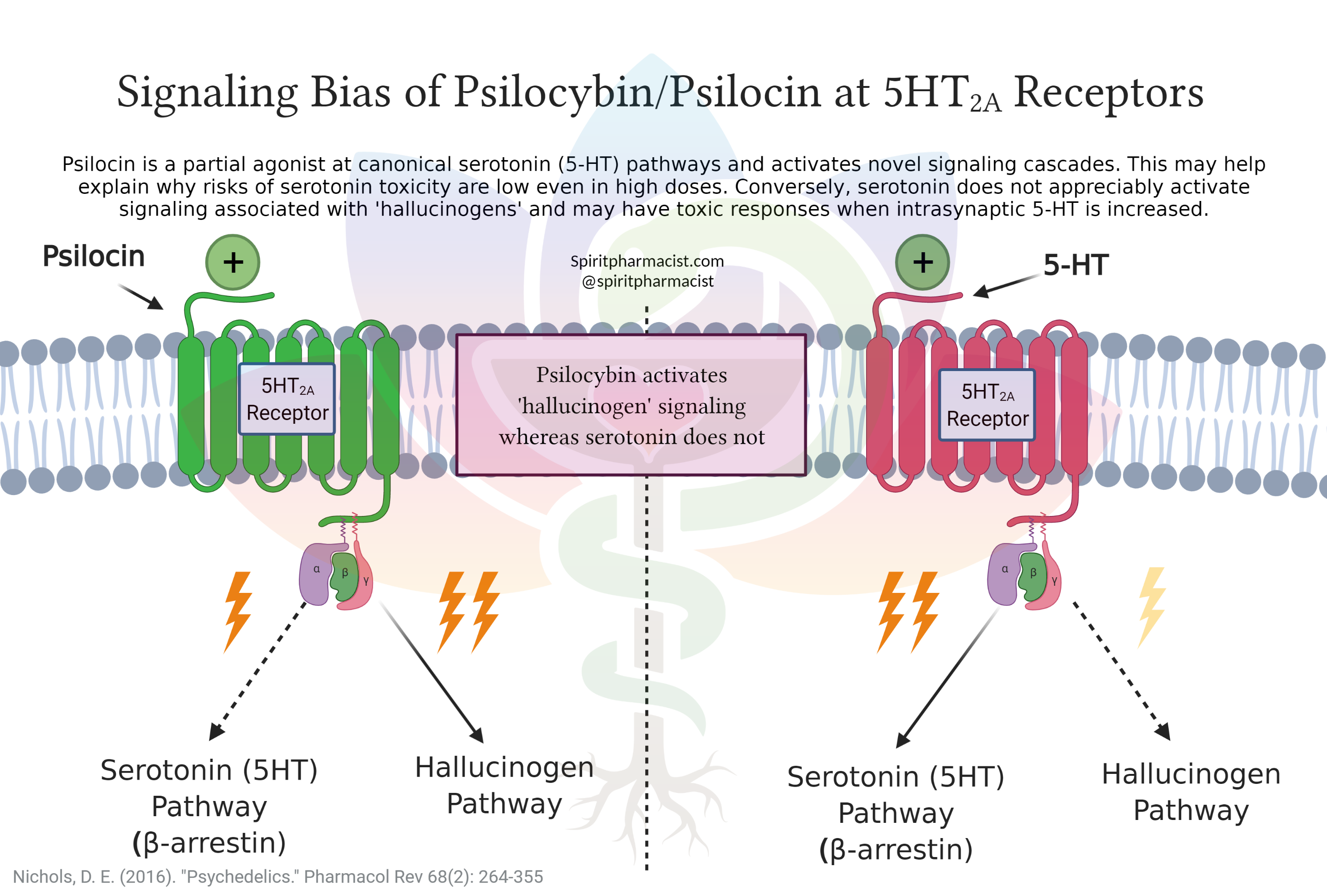 Much modern research has focused on trying to understand mechanisms of psychedelic from neuroscientific perspectives. Tryptamine psychedelics are known to disrupt the default mode network (DMN), a functionally connected network of brain regions that is active at rest and involves self-referential activity [4-6]. Acute diminishment of DMN activity leads to potential for greater interconnectedness of disparate brain regions. The cortex is rich in 5HT2A receptors and their activity is associated with sensory and thought processing. Disturbance of the ability to match incoming sensory information with ‘past priors’ along with liberation of limbic system content due to psychedelic use has been suggested to explain changes to thought processes and sensory perceptions. These phenomena have led to theories such as the ‘entropic brain’ or ‘relaxed beliefs under psychedelics’ (REBUS) models of psychedelic mechanisms in which the brain experiences a chaotic state that allows for a relaxation of prior belief models [7]. On a molecular level, serotonergic psychedelics have been shown to promote neurogenesis or structural and functional plasticity as well as adaptive change [8]. These effects occur in specific brain regions, such as areas of the pre-frontal cortex that have been associated with treatment-resistant psychiatric illnesses [9]. In sum, it seems tryptamine psychedelics profoundly disturb the brain’s default state and can disrupt pathologic patterns of neurotransmission while opening a window of neuroplasticity. These effects promote formation of new neural pathways and can offer rapid improvements in symptoms of several psychiatric illnesses as well as offering a window with enhanced potential for subsequent behavioral changes.

Do Classic Tryptamines Have a Lethal Dose?

Psilocybin, LSD, and DMT act as partial agonists at the 5HT2A receptor, meaning they do not fully activate the canonical serotonin signaling pathway. Partial agonism in conjunction with an inability to increase intrasynaptic 5HT may explain the low risk of life-threatening serotonin toxicities in overdose or in combination with other substances. Psychedelic tryptamine overdoses are rarely (if ever) lethal and offer relatively safe physical safety profiles compared to phenethylamines like MDMA [10, 11]. For example, lethal doses of psilocybin or LSD are more than 100x the normal dose [12, 13]. Although there is a decreased risk of life-threatening physical toxicities, potent and profound mental shifts as well as mild-moderate physiological effects can lead to traumatizing experiences, behavioral toxicity, or distressing post-use effects.

Tryptamine psychedelics may share much overlapping serotonergic pharmacology and none are known to be addictive compounds. There is significant interest in developing the therapeutic potential of many, if not all of them, for psychiatric, neurologic, and possibly anti-inflammatory indications. However, there are some noteworthy differences between them – both pharmacologically and subjectively. Pharmacological differences give rise to differences in drug interaction potential, use patterns and routes of administration, as well as possible therapeutic approaches and application.

An exhaustive comparison is beyond the scope of this introductory blog and the reader is referred to membership blogs and courses for more detailed pharmacologic information.

DMT is a widely occurring agent that is found across the world in both plants and humans [14]. It is not bioavailable by mouth under normal circumstances due to breakdown by MAO during absorption [15]. In order to mitigate the poor oral bioavailability DMT, it is traditionally combined with harmala MAOI’s from the ayahuasca vine, which allows for oral ingestion because first pass metabolism in the liver is inhibited, allowing for the psychoactive effect [16]. Without MAOIs, DMT can be ingested via several other administration routes although is commonly vaporized and inhaled. It is a short-acting agent when used intravenously produces larger cardiovascular responses than oral use of classic tryptamines [17]. The DMT experience has been characterized as interactive-relational and encounters with entities including gods, aliens, spiritual figures etc. are frequently reported [18]. The preservation of the subject-object relationship in the DMT experience may differ from the unitive and non-dual experiences reported with psilocybin or LSD [19]. Another curious pharmacologic difference between DMT and other psychedelic tryptamines is its inability to rapidly produce tolerance and lack of experience cross-muting with other tryptamine psychedelics [20, 21]. This may open the door for the development of therapeutic applications of DMT involving continuous infusion [22].

Psilocybin, the psychedelic found in ‘magic mushrooms’, occurs in psilocybe or strophophora mushrooms as well as some truffles and lichens. When taken by mouth, psilocybin is rapidly metabolized to psilocin (4-OH-DMT) which is considered the psychoactive component of magic mushrooms. Psilocin is then primarily metabolized by glucuronyltransferases to inactive metabolites [23-25]. Several large global drug surveys have indicated that psilocybin is the ‘safest recreational drug in the world’ and is being intensely studied for a variety of mental health disorders, including treatment-resistant depression [26]. Psilocybin can produce tolerance upon repeated dosing. The flagship studies done focused on the ‘mystical’ experience that can occur as part of psilocybin’s effects [27, 28]. The mystical experience is a non-dual experience characterized by ego-dissolution or a sense of oneness and unity with all things. The consciousness research into the mystical experience helps to support that there is a spiritual role that facilitates beneficial effects to the user as longer time improvements in illness of functioning are being associated with its occurrence [29].

LSD is a synthetic agent that is extremely potent and is dosed in micrograms. It is commonly taken sublingually or by mouth and dependent on liver cytochrome enzymes for metabolism, unlike DMT or psilocybin/psilocin [30, 31]. It is longer acting than other classic tryptamines and also binds with dopamine 2 receptors. The relatively long duration of action linked to slow binding kinetics and the formation of a ‘molecular lid’ with the receptor [32]. Like psilocybin, LSD is not known for physical toxicity in overdose or in conjunction with other drugs, although carries risks of adulteration or substitution with other drugs that have higher risks. Overall, psilocybin and LSD tend to affect consciousness research scales such as the 5D-ASC similarly [33]. LSD is perhaps the most stigmatized of classic psychedelics and is most associated with the rare condition hallucinogen persisting perceptual disorder (HPPD) where users experience a continuation of certain hallucinogenic effects after the experience has ended [34]. Repeated dosing produces acute tolerance as well as experience cross-muting with other classic psychedelics [35-37].

There are a variety of 4- or 5- substituted as well as ergoline derived tryptamine analogs including 5-MeO-DiPT, 5-MEO-DALT, 4-AcO-DMT, AMT, 1P-LSD and LSA which may possess additional or different pharmacologic effects at the SERT and 5HT receptors in comparison to classic tryptamine psychedelics. An example of this is 5-methoxy-N,N-dimethyltryptamine (5-MeO-DMT), which is both naturally occurring and synthetically produced. Similar to DMT, 5-MeO-DMT is short-acting and usually used via inhalation because of minimal psychoactivity when taken by mouth due to breakdown by MAO [38]. However, there appears to be novel pharmacologic properties and different types of risks compared to the classic tryptamine psychedelics. For example, 5-MeO-DMT is a full agonist at canonical 5HT2A pathways and can also block serotonin reuptake (SERT) [39]. When 5-MeO-DMT is taken with a MAOI there is a serious risk of serotonin syndrome, which has not been reported with classic psychedelic tryptamines [40]. 5-MeO-DMT is broken down to the active metabolite bufotenine, which is not psychedelic although is a potent vasoconstrictor [41]. 5-MeO-DMT is known for its non-dual unitive experiences in which the subject and object cease to exist as separate entities and are merged into one type of consciousness [42, 43].

Classic tryptamines have a good physical safety profile, promote functional and structural neuroplasticity, and along with psychological support or therapy have shown positive results in several observational and clinical studies in recent years. While the physical safety of these agents is excellent, they do present some extreme, challenging, and profound psychologic states to users. Extreme psychological states can cause impaired judgement and poor outcomes or persistent distressing post-use effects. 5-MeO-DMT is a naturally occurring tryptamine that is dangerous in combination with MAOIs, whereas the other classic tryptamine agents do not pose this risk of serotonin toxicity. While there is much pharmacologic similarity, significant variability exists among tryptamines in potency, bioavailability, tolerance, duration of psychedelic experience and subject qualities of experience.