Risk of combining MDMA with ritonavir or cobicistat 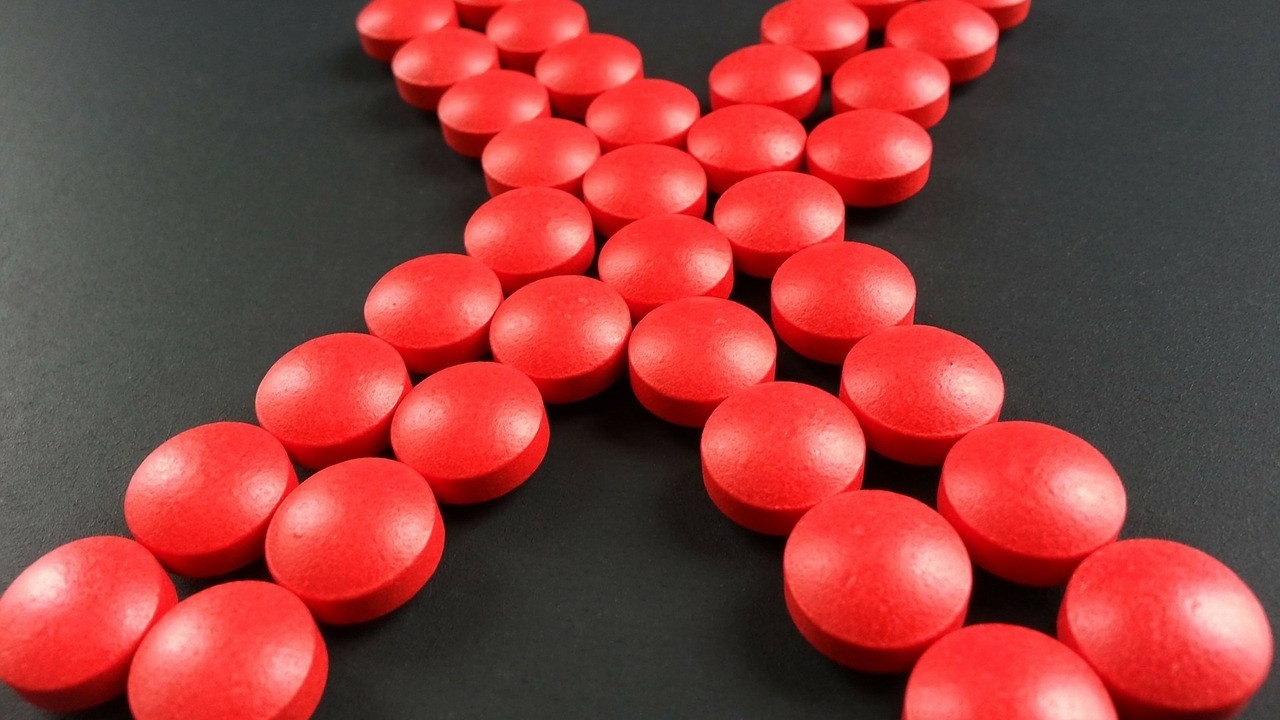 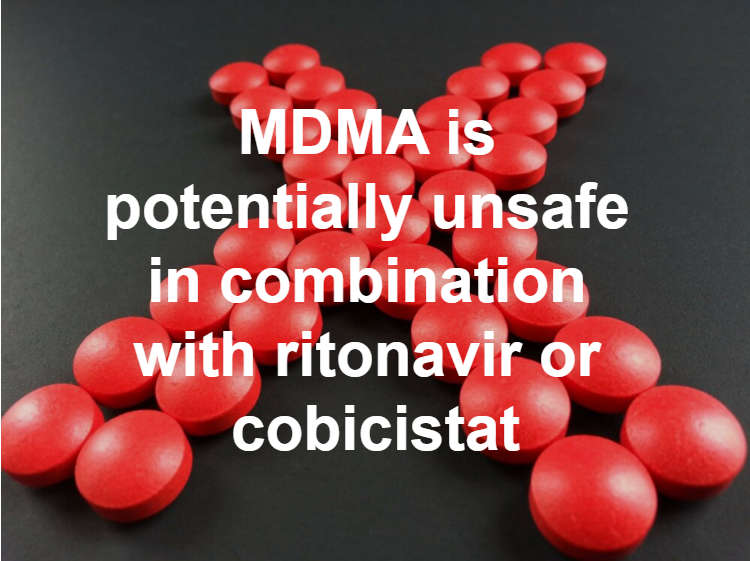 Dear Spirit Pharmacist: What are the risks of combining ritonavir or cobicistat with MDMA?

Answer: MDMA is potentially unsafe in combination with ritonavir or cobicistat. This is supported by case reports, unpublished manufacturer data, and data available for similar amphetamine compounds. Persons interested in MDMA should not suspend HIV medication use in order to use MDMA. Instead discussion of treatment strategies should involve the prescriber of their HIV medication.

So…What if I want to undergo MDMA therapy* to work on my mental health?

The medications in query, ritonavir (Norvir) and cobicstat (Tyboost), are used in the treatment of Human Immunodeficiency Virus (HIV). They are often combined with other HIV anti(retro)viral medications, which boosts their levels in the blood. They do this by blocking metabolism of drugs in the liver, which prolongs and increases antiviral effects, producing better results and decreasing chances of resistance developing to medication. They are known as ‘pharmacokinetic enhancers’ when leveraged this way. The risk or downside to this approach is that it leaves the user susceptible to drug interactions with other substances/medications.

Other HIV combination medications that have either ritonavir or cobicstat in them include*:

There has been at least two cases reported of serious toxicity or death from combining ritonavir with MDMA (Bracchi 2015).

In case one, a 32 year old male ingested 180mg of MDMA at a night club and suffered a fatal serotonergic toxicity (Mirken 1997, Henry 1998). The user had ingested MDMA several times previously without toxicity according to his partner. The user had started 600mg of ritonavir/day twice daily two weeks prior and had a history of liver dysfunction secondary to alcohol use. It should be noted that the standard dose of ritonavir as a pharmacokinetic booster is 100mg/day whereas this user was taking 1200mg and it relies of the liver to be metabolized itself. Upon autopsy, blood concentrations of MDMA were 10x higher than expected given the amount ingested (Tseng 2002, de la Torre 1999).

In case two, a 23 year male taking ritonavir 100 mg/day, atazanavir 300 mg/day, and tenofovir/emtricitabine 300/200 mg/day took two tablets of ecstasy spaced 3 hours apart. After dancing for 4 hours he became progressively ill and was admitted to an intensive care unit (ICU) with hyperthermia (41.1C or 106f), seizures, and impairment of consciousness (GCS 3). He developed renal and liver failure, was put on life support or mechanical ventilation to support breathing, and required 11 days in the ICU or 3 weeks in the hospital to recover enough to return home. Analysis of blood concentrations demonstrated concentrations 9x higher than what would be expected from a single 150mg dose of MDMA, although the individual reportedly took two tablets so may represent closer to~4-5x increase in blood concentrations compared to what could be expected (Papaseit 2012, Farré et al. 2015).

In case three, a 29 y/o male with history of HIV/AIDS (CD4 count 24: history of neutropenia, Karposi’s sarcoma, Pneumocysstisti carinii pneumonia, and thrush) was switched to sasquinavir 400mg twice daily and ritonavir 400mg twice daily and ingested two tablets of MDMA about 4 days later. He experienced prolonged stimulant effects, insomnia, and agitation lasting about a day, which prompted him to take some GHB, which resulted in respiratory failure and being placed on life support. Upon awakening and stabilization he was adamant that he had used both substance previously at similar doses on a previous HIV regimen lacking ritonavir (Harrington 1999).

MDMA is primarily metabolized to either active or inactive metabolites by CYP2D6 although other liver enzymes have been implicated in its metabolism. Ritionavir and cobicistat are well known to inhibit CYP3A4 although have effects on many other liver enzymes including CYP2D6 and are notorious for drug interaction potential overall. In comparing the profiles of drug inhibition or pharmacokinetic enhancement profiles of ritonavir or cobicstat, there is not anything that would support they are much different in risk as far as combining with MDMA. While ritonavir and cobicstat have some differences, the differences they have would not be predicted to decrease risk of MDMA (Bracchi 2015, Tseng 2017). Adulterants or substance misrepresentation is also of concern as many other amphetamines and related compounds interact strongly.

The manufacturer of ritonavir stated that they had studied theoretical interactions and predicted that for the average person a 2-3x increase in MDMA blood concentrations could be expected. However, they added that for a fraction of the population the increase could be as high as 5-10x depending on genetics or concurrent illnesses (Mirken 1997). In the two cases described above, concentrations found were 9-10x the expected concentration from a single 150mg dose of MDMA. All of this strongly signals potential risk in combination, however there are several caveat variables in understanding what happened in these cases and why the outcomes were so severe. In case 1 the subject was taking antiretroviral rather than booster dose of ritonavir, had pre-existing liver impairment, and ingested in a nightlife setting. In case 2 the subject re-dosed ecstasy and reportedly danced for 4 hours straight. The hot environment, fluid loss, excessive intake or lack of intake of water, and physical stress of dancing are known risk factors for exacerbation of hyperthermia and precipitation of severe toxicities. Cases of death resulting from ingestion of ecstasy as low as 2x the usual blood concentrations have been reported in these types of environments, underscoring the ability to exacerbate risk (García-Repetto 2003). In case 3 the subject was also on a larger dose of ritonavir than is standard today and had a history of advanced AIDS, may increase medical risks of drug use.

From what is currently known about drug interactions between ritonavir or cobicistat with MDMA, it seems there is likely risk of problematic drug interaction and proceeding with MDMA use may not be safe. The question then becomes about potential management strategies. Current HIV treatment guidelines shed little light on a management strategy and recommend behavioral interventions that “are used for other drugs use disorders” in the context of MDMA use as a “club drug” (DHHS 2020 pg. 201).

1.       Discuss desire to undergo MDMA therapy with HIV provider, explain it will take a few months as there are typically a few sessions spaced a month apart with intense psychotherapy work between. Ask if:

a.       There is another HIV medication without ritonavir or cobicistat that you could switch to

b.      If the CD4 count is high enough and viral load low enough then a structured treatment interruption for the duration of the MDMA therapy

*These may be the best strategies. Please involve your HIV treatment provider to help manage decisions appropriately. These decisions are very personal and highly technical, do not attempt to make them by yourself. Treatment interruptions or poor adherence to HIV medication can increase the risk of drug-resistant HIV developing or transmission of HIV to others, thus is not recommended once taking antiretroviral therapy (DHHS 2020, pg 60)*

2.       Shifting focus to a different psychedelic. Psilocybin would not be predicted to have this same problem with drug interaction. Ketamine would also have strong interaction potential with ritonavir or cobicstat and increased ketamine blood concentrations ~2-4x could be expected (Peltoniemi 2016). If the dose was adjusted and ketamine was administered in an monitored medical setting, this could still be a safe option. Use of ketamine in unmonitored settings in combination with ritonavir or cobicistat could be unpredictable or dangerous.

3.       A dose adjustment strategy could be applied to MDMA. It could be an appropriate precaution to start at 25% of the usual dose if combining with ritonavir or cobicistat, which would be 25mg if considering 100mg as normal (Tseng 2002). Given the wide estimations in effects on blood concentrations of MDMA (2-10x increase), this would equate to taking 50-250mg of MDMA. Single doses > 125mg have not been used to start in clinical trials of MDMA (Mithoefer 2019), thus this strategy still risks overdose and potential physical adverse effects or toxicity. Hot environments, prolonged physical activity, should be avoided as well as over or under hydration. Avoidance of re-dosing or booster doses is another reasonable strategy to lower risks. While this may help mitigate physical risks, there is also a chance it could introduce psychological risks. For example, in clinical trials of MDMA assisted psychotherapy, one participant that received low dose MDMA as an active control (30mg) became suicidal (Mithoefer et al. 2018, 2019). Therefore, this strategy is likely fraught with safety concerns and is not preferable.

2.       Department of Health and Human Services (2020). Guidelines for the Use of Antiretroviral Agents in Adults and Adolescents with HIV. https://aidsinfo.nih.gov/contentfiles/lvguidelines/adultandadolescentgl.pdf

*MDMA is currently regulated as an illicit CI substance as well as experimental drug in the USA. Therefore, MDMA is not an FDA approved therapy and use outside of clinical trials or expanded access programs is illegal.