How can the effects of psychedelics be differentiated from adverse effects or serotonin toxicity?

This one I wanted to address in both a video and written blog post.

It’s an important discussion both in terms of psychedelic safety and in terms of persons understanding what happened to them in certain experiences or whether to proceed on the psychedelic healing path. I’ve noticed that oftentimes when persons are perhaps taking some medication or have recently stopped taking medication or are using recreational substances in unhealthy ways that their first psychedelic experiences can be characterized by unpleasant somatic effects with little in the way of spiritual feelings, mystical insight, or psychedelic effects. It leaves them feeling confused as the effects experienced seem misaligned with reports they’ve read.

They begin to wonder if they are experiencing Serotonin Toxicity? Or if their medications or withdrawal from them could be responsible? Maybe psychedelics just don’t agree with their bodies? Or perhaps it’s their body telling them it disagrees with their lifestyle?!

Differentiating strong somatic effects of psychedelics from toxicity is an important skillset for facilitators or providers of psychedelic experiences to possess. Helping persons understand when effects were likely related to medication, if they did indeed experience toxicity, or whether their experience is a lesson to be integrated can be the difference between healing and traumatization.

Side Effects or Purging?

When running a clinical trial of psychedelic assisted therapy in the modern day, researchers are required to report beneficial effects as well as side effects or adverse effects. There is a dichotomy between them with reduction in illness scales or scores (e.g., depression rating) representing efficacy and unpleasant or ‘off-target’ effects such as nausea, sweating, anxiety, panic etc. representing side effects. Side effects are different than adverse effects which are much more serious and involve things like seizures (which have not been observed in clinical trials to date). This model follows regulatory standards and is just part and parcel with how research is conducted on drugs.

However, in anthropologic literature discussing shamanic philosophies of psychedelic sacrament use it is common to find that many unpleasant effects such as nausea, vomiting, diarrhea, shaking etc. are viewed as purgative effects or energetic effects that allow for the body to purge negative energies, remove energetic blockages, or be a form of catharsis. For example, indigenous cultures are more likely to view and interpret vomiting in response to ayahuasca use as a positive thing that helps to clean the body rather than a side effect that makes use less favorable. Many lyrics to traditional ayahuasca songs or icaros praise ayahuasca for its ability to clean the body or spirit.

I tend to believe a little bit of both and encourage persons to think about where the line is for them. If they spend an hour on the toilet gagging the first few times they use mushrooms, yet notice they feel more ‘open’ afterwards and the morning nausea that’s bothered them for years is reduced in the days following the experience then I tend to think the ‘purging’ is helping them and is prognostically good. Whereas, if they vomit for six hours every time they drink San Pedro, become dehydrated, then need to seek help in the ER and feel worse afterwards then it’s difficult to think continuing is humane, helpful, or simply purging.

What is Serotonin Toxicity or Serotonin Syndrome?

What are Signs and Symptoms of Serotonin Toxicity or Serotonin Syndrome?

The classic triad of symptoms indicating Serotonin Toxicity are myoclonic seizures, severe hyperthermia, and altered mental status. If severe enough, these symptoms can lead to unstable blood pressures and heart rates, respiratory failure, and other life-threatening complications [3]. In the context of psychedelic experiences another red flag may be intense somatic effects that outlast the expected psychological trajectory of the experience.

What Kinds of Substances Are Capable of Causing Serotonin Toxicity?

How is Serotonin Toxicity Diagnosed?

The gold standard diagnostic criteria for Serotonin Toxicity is the Hunter’s Decision Rules due to the highest levels of sensitivity and specificity for diagnosis [5]. Roughly this means that it picks up the cases it needs to (sensitive) without picking up cases it doesn’t need to (specific).

Other criteria such as the Sternbach’s Criteria is sensitive, but less specific. It includes symptoms such as diaphoresis, dilated pupils, diarrhea, shivering, or tremor etc. of which the individual only needs to display three. The latter list of symptoms tends to share significant overlap with unpleasant somatic effects of serotonergic psychedelics creating a risk for false positives to be reported when looser diagnostic criteria are employed.

Despite having disadvantages in making a clear diagnosis of Serotonin Toxicity, looser criteria such as Sternbach’s may be reasonable to use as a screening criterion to ensure that severe Serotonin Toxicity does not develop. For example, if a person in an ayahuasca experience began shivering, sweating, and seemed confused or restless it would be reasonable to monitor them closely and attempt to check their temperature, yet likely not beneficial to activate emergency help systems until clonus or hyperthermia were observed.

When used in moderate doses without concurrent substances that raise serotonin levels psychedelics are not high risk for Serotonin Toxicity [2]. There’s also a spectrum of risk for it occurring depending on the serotonergic psychedelic in question as well as what it is combined with.

Classic tryptamine psychedelics such as psilocybin, LSD, or DMT are low risk for Serotonin Toxicity, either alone or in combination with other serotonergic substances. The reason this is true is because although they can strongly bind 5HT2A receptors, classic tryptamines only activate them partially compared to serotonin itself. They also don’t act to trap serotonin (e.g., SSRIs), block its breakdown (e.g., MAOIs), or release additional serotonin (e.g., MDMA) so have no ability to raise serotonin levels. These are likely the underlying pharmacologic reasons that physical adverse effects or Serotonin Toxicity is almost never observed, even in the context of large overdoses. One exception appears to be lithium which has risks of precipitating seizures in combination with many different serotonergic psychedelics [6].

Not all psychedelics from similar classes tend to behave the same way. For example, despite 5-MeO-DMT being a tryptamine psychedelic like psilocybin or DMT, it has been reported to cause Serotonin Toxicity and death in combination with MAOIs. Please see the FIVE Guide for a detailed discussion of why this is so.

Psychedelics that contain MAOIs such as ayahuasca or variations thereof (pharmahuasca) may have the highest risks of Serotonin Toxicity in the context of combinations with other agents that can raise serotonin levels (e.g., SSRIs, MDMA). There is little data to support that use at regular doses without concurrent substances that can raise serotonin carries risks of Serotonin Toxicity.

When Should Medical Attention Be Sought?

The chart below roughly divides symptoms into categories that allows persons to understand where on the spectrum of psychedelic serotonergic effects or symptoms of Serotonin Toxicity an individual falls and whether watchful waiting and close monitoring is warranted or if seeking immediate medical attention is a better route. Seeking medical attention for a psychedelic experience will significantly disrupt ‘set and setting’ although is better than preventable tragedy due to delayed medical care. Conversely, seeking medical attention for mild symptoms that could have been managed with basic support likely misses a chance for healing or self-discovery and may result in traumatization due to unnecessary disruption in ‘set and setting’. 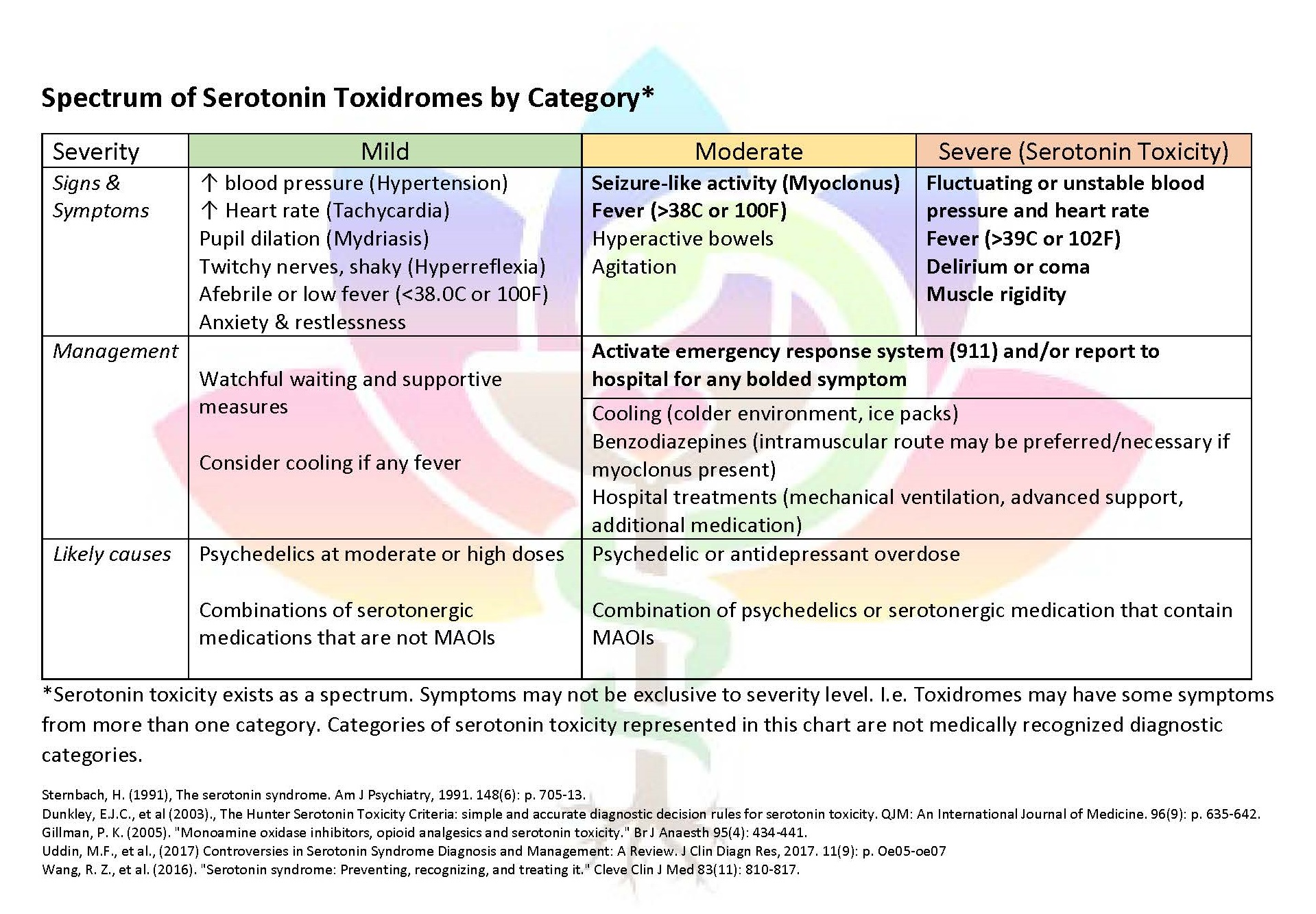 Use of clear differentiating factors such as severe hyperthermia, myoclonic seizures, and intense effects that outlast expected psychological trajectories or seem to progress as time passes are useful in gauging if a toxic response is being observed. Facilitators or providers of psychedelic experiences need clear protocols to avoid combinations of drugs that are likely to raise risks of toxicity as well as how toxic responses will be managed in the rare event they occur.